Here I am the first day of 2013 in a plush romantic hotel in the heart of DC; alone. I think it’s important for me to get used to this, to enjoy it even. This may very well be the rest of my life. I say I am okay with that and then I choke up a little bit; what’s up with that? This was supposed to be a romantic weekend for two; our Christmas gift to each other. But that life is over. This is my new life.

I enjoyed the Botanic Gardens today, alone, with all those people.

I went to see the holiday train display and I actually longed to be there with a little boy and not with a man. There were lots of little boys there and they were excited and happy to be among all those trains. The youngest ones were enthralled over Thomas the Train Engine the older ones by the Lionel trains and models and the different displays; which took on a dark fairytale look. I’m not up to speed on the latest books, movies, or cartoons for young boys so I don’t know if the displays were based on anything in that culture. To me, I would describe them as pictures out of The Brothers Grimm, dark and mysterious.

There were a set of twins or maybe they were just brothers close in age, probably about 4 or 5. The place was really crowded but they had no problem or qualms about grabbing hold of your legs or whatever they had to do to push their way up front. I ignored it for a while not minding and not really conscious of it. I guess when you have been a mother it’s a familiar feeling and even though it has been a long time since little boys rounded my legs like cowboys at a hoe down it’s just as natural today as 15 years ago. When I finally realized I turned my head to see a smiling mother behind me. “I’m sorry” she said “they are just so excited”.
“Me too” I smiled back at her.

At another display there was a menacing spider in the corner. It was huge but I didn’t see it until a mom behind me pointed it out to her family of four. The daughter squealed, the father laughed and the son, whose age I am going to guess at 9 said “If that spider was real, I would stare him down.” My back was to them but I was laughing, he was so serious. 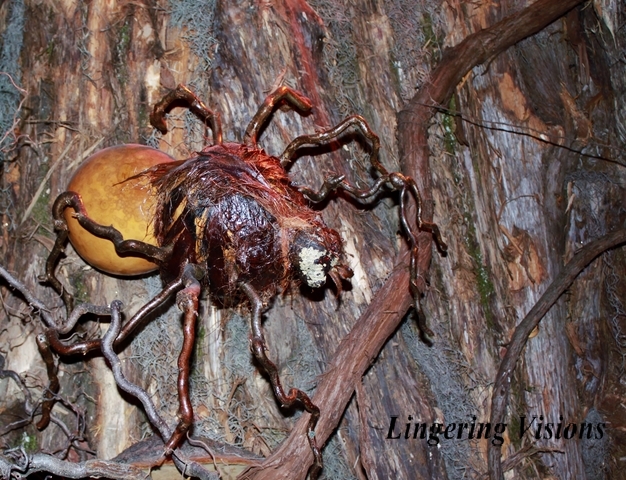 This is my new life. There was no one with me to share it with so I am sharing it with you.

As I was doing some on-line research to see if I could find out more information I came across a couple of links. One from the Georgetowner (obviously a DC publication) and the other from one of our very own here at word press. Be sure to check out Raoul Pop for his youtube video.

Roaming, at home and abroad